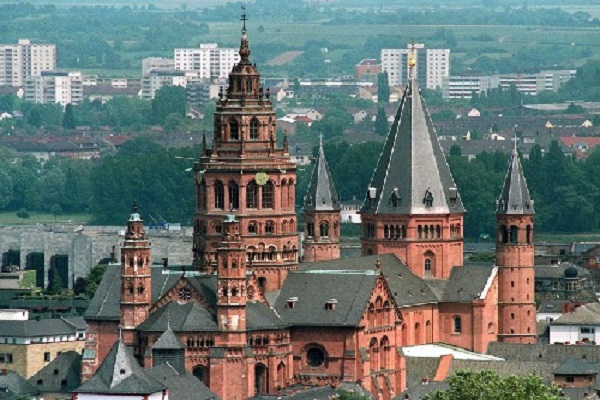 The St. Martin’s Cathedral, also known as Mainz Cathedral, is an impressive 1000-year-old church located near the heart of the city. It’s predominantly a Romanesque church, but ongoing additions and improvements over the years have altered its appearance and influences. Still, it’s a beautiful church that’s perfectly situated if you are exploring the city on foot.

Above the roofs of the half-timbered houses in the Old Town of Mainz rise the six towers of St. Martin's Cathedral (German: Mainzer Dom). Along with the cathedrals of Worms and Speyer, Mainz Cathedral represents the high point of Romanesque cathedral architecture in Germany.

The Cathedral of Mainz dates from 975 AD but was continually rebuilt and restored, reaching its present form mainly in the 13th and 14th centuries.

It was at Mainz Cathedral on March 27, 1188, that Holy Roman Emperor Frederick I (Frederick Barbarossa), took up the Cross in the Third Crusade called by Pope Gregory VIII.

During World War II, Allied bombing of Mainz destroyed 80% of the city, but the cathedral was left almost entirely unharmed.